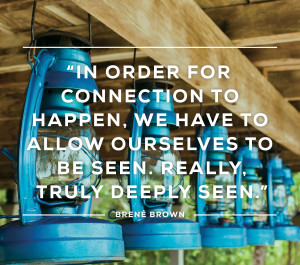 We all have days when we would rather stay in bed, pull the covers up over our head, and stay safe in our little cocoon. There are days when life seems like just too much. Depression, anxiety, shame, fear, and guilt keep us from showing up for our own lives. Even those days when we get out of bed, go to work, go to school, raise our kids, see our friends…we don’t always really show up. Depression, anxiety, shame, fear, and guilt convince us to keep some parts of ourselves tucked away under the covers, hiding, protected from being rejected or hurt.

Instead, let’s learn to live wholeheartedly.

My youngest son struggles with anxiety. It has been hard for him to show up, to ask questions, to try new things. One day, in 6th grade, he came home from school and told me he was trying out for the basketball team the next day. I encouraged him and was proud of him but didn’t realize until later that 30 kids went out there for a multi-day tryout and that only 10 kids would make the team. He made the team, but that is utterly beside the point. The point is that there was a high risk of failure and embarrassment, lots to worry about. He made the choice to show up. Wholehearted living.

You don’t try that new yoga class or art class because you’ll probably mess up and look stupid. You don’t raise your hand to ask a question in class because everyone else probably knows the answer and you’ll look like an idiot. You don’t apply for that promotion because you probably won’t get it; and even if you did, you’d just mess it up anyway. You don’t tell your friend that you feel terrible for yelling at your child because she will think you are a terrible mother. You don’t go visit a sick or grieving relative because you don’t know what to say to them or what to do. We don’t feel worthy, so what’s the point of showing up? Why set ourselves up for failure?

Another of my sons is an athlete through and through. He loves being part of a team, loves competition, loves physical challenge. He’s mostly chosen to play the clutch positions: relief pitcher, receiver, volleyball setter; basically, the positions where winning or losing the game is often in his hands. I am not an athlete. I remember saying to him once that I would be constantly afraid of failing, losing the game for my team, letting everyone down (and often had those fears watching him from the stands!). He told me that he sees it completely the opposite. He is the one who can win the game. His teammates rely on him. He is not afraid to be seen. Wholehearted living.

So many of us make choices not to be seen. If we never step up to bat, we will never strike out. No one will laugh at us if we don’t sing along or go out on the dance floor. Our friends won’t leave us if we stay nice and fun and happy and helpful and never show the dark, messy, yucky parts of ourselves. Our new boyfriend won’t think we’re crazy if we don’t say “I love you” first.

The problem is that when we don’t let ourselves be seen, we’re always a little bit alone. We don’t feel deeply connected or safe in a relationship when others haven’t really seen us, don’t really know us. And guess what? That can lead to depression, anxiety, shame, fear, and guilt.

The only answer is the hardest answer and that is to live brave. Based on the research of Brené Brown, courage is THE path to wholehearted living. I have told myself and my kids about 10,000 times that there is no brave without feeling scared. Fear and courage go hand in hand. I love roller coasters because it’s that exhilarating combination of terror and “woo hoo!!” I was afraid, but I beat the fear.

My oldest son lives brave. He is a musician, entertainer performer. And although singing in front of an audience would terrify me, that’s not the arena in which he is the most brave. He is brave in his creative expression of how he feels personally and about the world in general. He is brave in his choices of how to live his life and which paths he chooses to follow. Wholehearted living.

My work with some clients is to help them learn how to show up, be seen and live brave. The research shows that this will help them live lives that are authentic and full of joy, play, connection, empathy and compassion.

My work with myself is to practice every day showing up, being seen and living brave. It’s not a one-time thing. It is a daily, moment-by-moment practicing. I’m working on it! 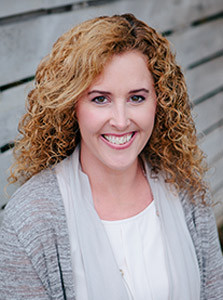 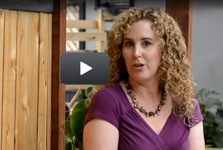